I sure hope that you like garlic, because this recipe is going to give it to you.  Everyone has had or heard of roasted garlic, but not everyone has actually made it.  Well, I’m going to show you how to do it and then we’re going to attack some bread with it.  Warning: Gratuitous use of butter.

Some people can’t imagine eating plain garlic, even if it’s roasted.  Often, those people have never tried it.  Roasted garlic isn’t nearly as strong as raw garlic, and it even turns out to be sweet.  Our first step is to roast the garlic.

Preheat your oven to 400°F.  Cut the tops off of the head of garlic, exposing as many of the cloves as you can.  Don’t worry if there are some that are not, they’ll roast just fine. 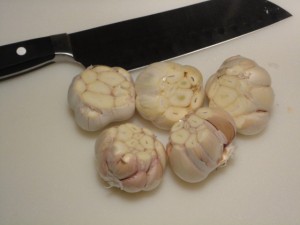 Next put the heads onto some foil, and pour some olive oil over each one.  Then fold the foil into a nice packet.  I do that same to cook veggies on the grill.

Place the packet into your oven right on the rack.  Roast it for 30-40 minutes.

Let them cool as long as you can.  They may seem cool on the outside, but don’t forget there’s oil on the inside.  Once they’ve cooled, squeeze the cloves out of their skins one by one.  They should come out pretty easily.  If there are any that didn’t get cut in the beginning, you may have to cut them open.  If you don’t want a garlic manicure, you should probably use some kind of plastic gloves. 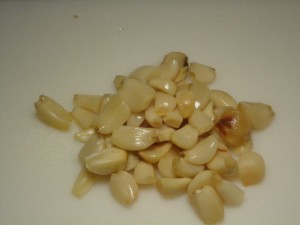 You can’t tell from the photo, but those cloves are all soft and delicious. Now you’re going to mix these cloves with the butter.  The reason that I used butter was so that it would melt down into the bread while it was in the oven.  You can certainly use oil, if you like.  I used a food processor and pulsed it together until it was smooth.  Cut your bread in half the long way, place it on a sheet pan or foil, and spread the garlic butter on the bread.  Liberally.

Sprinkle the Parmesan cheese on top of the butter, and then the herbs that you like.  The amount is really up to you.  This is your garlic bread, after all.

You oven should be up to temperature by now, so put the pan or foil into the oven.  Bake it for 15 minutes or so.  Once it starts looking like the bottom of the bread is toasted and the butter is melted, turn on the broiler.  Be sure to keep an eye on it, a few seconds can mean everything with the broiler.  Once the top gets nice and brown, take it out.

Let it cool a bit, and then slice it up!